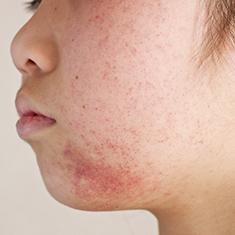 There are two categories of food allergy, based on the clinical features, which follow on from the biological process leading to the allergic reaction. Effectively the doctor is asking the question, is this an anaphylactic type of reaction or not? I emphasise the word type, as a milder reaction can have many of the features of anaphylaxis, if it shares the same biological process. The two categories of allergic reaction are:

IgE is an antibody, measureable in the blood, which is critical for mediating the anaphylactic allergic reaction (and the more mild reactions of that type). Both IgE and Non-IgE allergies involve the immune system reacting against a specific food type.

Despite there being a division in whether there is an IgE response, there are a number of situations where the response is mixed.

The role of Non-IgE reactions in a number of common medical problems has been recognised, more frequently over time, such as irritable bowel syndrome, eczema and infant colic and gastro-oesophageal reflux disease. Cow's milk allergy would be the commonest form of food allergy in children, but also soya and non-coeliac wheat allergy would also be seen frequently in those same individuals.

Often food allergies of the IgE type are investigated using skin prick and specific IgE blood tests. Non-IgE allergies are usually investigated with dietary exclusion tests. Occasionally it is not clear whether gut symptoms are related to a Non IgE food allergy and then an endoscopy (gastroscopy and particularly a colonoscopy) can be very helpful in providing evidence of gut allergic responses.