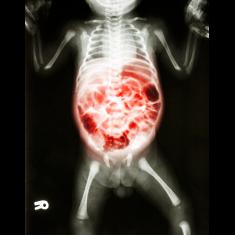 IBD is a chronic idiopathic inflammatory condition of the bowel. Now that does not tell you very much at all, but in essence the process of inflammation is switched on in the bowel wall, but cannot switch off. The ongoing response to inflammation is to lead the bowel to become damaged (loss of function) and in turn nutritional problems follow.

What forms of IBD are there?

Three forms with two distinct subtypes (the third being indeterminate, or the doctor would like to make it clear there are some features that prevent a clear characterisation).

There can be some features of IBD outside the gut (called extra intestinal manifestations). Liver, skin, joints and eyes can be affected.

The treatment of IBD is with immune suppression of various types and formulations.

What symptoms can occur with IBD?

It really depends on what part of the gut is involved. Large bowel (or colonic) disease causes diarrhoea that may have blood or slime mixed with it. Colonic disease is called colitis. Small bowel disease is only caused by Crohn's disease and tends to not cause diarrhoea but pain, poor appetite and anaemia.

How can a doctor diagnose IBD?

The possibility is raised because the right signs and symptoms are identified. Blood tests can be helpful in supporting this suspicion, but the definitive diagnosis comes from an endoscopy and histology (biopsies are collected at the time of endoscopy and this helps delineate what form of IBD is present.